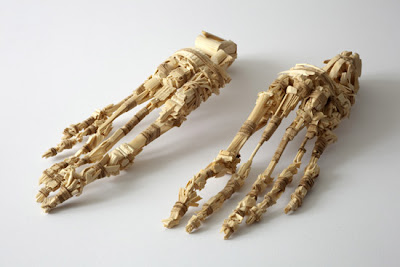 A sculpture of a pair of feet made from wood, canvas, tea and coffee has won this year's Threadneedle Prize.

Ben Greener's piece, titled My Feet, beat five other works to win the £30,000 prize - the most valuable in the UK for a single work of art.

The prize was voted for by members of the public who visited the Threadneedle exhibition in London.

Truscott's work, which depicts a line of captured German soldiers during the battle for Stalingrad, collected 13% of the vote. 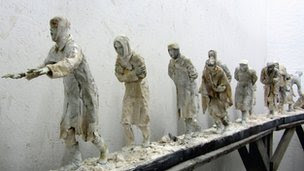 My Feet is one of a series of anatomical studies the artist has created from wood which also includes hands, a skull and a spine.

The piece is currently listed for sale on the Threadneedle website for £1,500.

There were more than 4,000 entries for this year's prize.

The Threadneedle Prize exhibition is open at the Mall Galleries in London until 13 October.