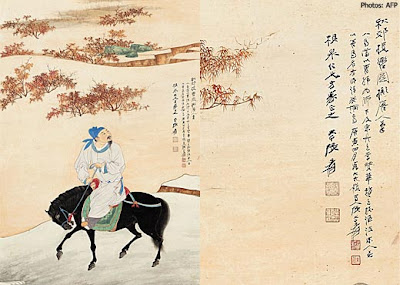 Sotheby's has withdrawn the sale of a painting by a leading Chinese artist after a Taiwanese Buddhist nun claimed ownership.

Riding in the Autumn Countryside, painted by Zhang Daqian in 1950, had been due to go up for auction at Sotheby's in Hong Kong on Monday.

But Lu Chieh-chien filed a writ claiming the artist had given the work to her late father in the 1950s.
The painting was expected to fetch up to $1.6m (£1m).

In a statement, Sotheby's said: "Since the claimant and the consignor cannot resolve the issue to their mutual satisfaction, Sotheby's has decided to withdraw the painting from the auction."

The South China Morning Post said that in September Lu Chieh-chien had seen an advertisement for the auction and contacted Taiwanese police.

The writ was later filed at the Hong Kong High Court.

The Post reported Ms Lu's claim that the painting had been given to her father, Lu Gen-quan, a friend of the painter, in Hong Kong in the 1950s.

The writ points to writing on the front of the painting: "For the approval of my colleague Brother Gen-quan."

The painting was given to Ms Lu for her marriage in 1983 and she then entrusted it to her brother when she became a nun, she says.

It was subsequently entrusted to an employee, Shu Dun-sie. The writ demands he account for its whereabouts.

Zhang Daqian, who died in 1983, was one of the best known Chinese artists of the 20th Century and sales of his art have soared in recent years.

His works fetched more than $500m in 2011 alone, making him the top auction earner for paintings, according to the Artprice data service.