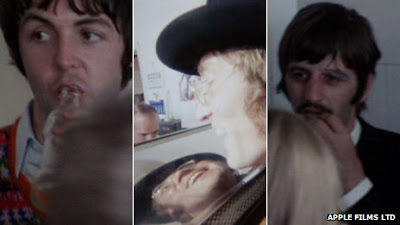 Previously unseen footage of The Beatles sharing fish and chips while filming their 1967 film Magical Mystery Tour has been posted online.

Arts website The Space is hosting the footage, discovered during the making of a new documentary about the film from BBC Two's Arena.

It shows The Beatles taking a break from the Magical Mystery Tour coach at a fish bar in Taunton, Somerset.

The film was first broadcast by the BBC on Boxing Day 1967.

It was not a hit, confusing the festive audience, and was savaged by critics in reviews that branded it "rubbish".

The film will be shown on 6 October on BBC Two for the first time in more than 33 years.

It will follow a new documentary, Arena: The Beatles' Magical Mystery Tour, looking at the film's "artistic merit and cultural significance".

Arena has placed the previously unseen footage, which it said was reclaimed from the "cutting room floor", into a new short film made in association with The Beatles' record label Apple.

The video is available to watch online on The Space, the arts website developed by the Arts Council and the BBC.

It is part of a spin-off project from award-winning documentary series Arena, called The Arena Hotel.

The project will see the show open up its archive of 600 films to audiences in a "virtual hotel" environment.

"Few people have seen Magical Mystery Tour in its entirety and the material in the chip shop has never been shown anywhere," explained Arena editor Anthony Wall.

"It captures perfectly the fabulous world of The Beatles at this time.

"They're happily rubbing shoulders and sharing a simple meal with the other passengers on the coach, and at the same time creating an extraordinarily avant garde film, which of course would soon be broadcast by the BBC to a dumbstruck nation."

This week marks 50 years since The Beatles had their first hit record with their single Love Me Do.

Arena: The Beatles' Magical Mystery Tour is on BBC Two on 6 October at 21:45 BST.