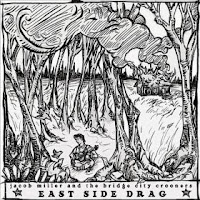 There are plenty of contemporary artists and bands tapping into the sounds and styles of old music, whether it’s ‘50s rockabilly, ‘60s beat, ‘70s rock, ‘80s post-punk or even ‘90s Britpop and grunge; and just about everything in-between. Far fewer artists go back as far as the pre-rock ‘n’ roll ‘40s, and less find their inspiration from the pre-war blues and country styles that marked the beginning of modern popular music. The most noticeable exception of recent years has been Australian bluesman C.W. Stoneking, but he’s not working in isolation, as Jacob Miller and the Bridge City Crooners prove.

22-year-old Miller released his debut album in 2011, a twelve-track collection of “country, blues and ragtime”, and he’s followed up quickly with “East Side Drag”; this time an eight track EP, but essentially, more of the same styles and approach. He’s obviously got an itch for old-time Americana and it needs a regular scratch. When he’s not at home in Portland, Oregon, he travels and wanders throughout North America, and his fascination with the road is reflected in his dusty atmospherics and his song selection, “Lonesome Road Blues” in particular. The EP kicks of with the excellent upbeat title track (is that a kazoo?) and the much-covered “Hesitation Blues”, here given a much-needed makeover, though of course, it retains its traditional roots. All in all an entertaining collection, which should appeal to old-time music fans, and anyone interested in the foundation stones of modern Americana.
www.facebook.com/jacobmiller
www.jacobmiller.bandcamp.com
Rob F.