Review: The Subsonics – In The Black Spot

The Subsonics – In The Black Spot (Slovenly Recordings) 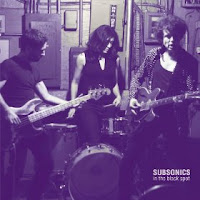 Their seventh album and their first in seven years, I’m embarrassed to say, even though fellow Georgians Black Lips described The Subsonics as ‘the best band in Atlanta’, this is the first time I’ve heard them. I feel like I’ve been deprived. First it was Disneyworld, then the many delights Joanne Edington had to offer, and now this. If I weren’t so old and lazy I’d seriously consider suing someone.

Anyhow, the album; 15 tracks in less than 30 minutes, with nothing coming in at over three minutes. It’s like listening to the first Wire record, as envisaged by a trio of Southern, garage dwelling punks, with an unhealthy interest in The Cramps, the Velvet Underground and proper, first generation glam. Really, what’s not to like. Every song comes with a bona fide pop hook, and vocalist / guitarist Clay Reed sings like a huffy, hard-done-by Marc Bolan, whilst squeezing out strangulated runs on his instrument. The rhythm section keep things moving, and considering the amount of tracks and their brevity, I’ve yet to locate the filler. Listen, buy, cherish and then pester them daily ‘til they bring out album number eight. Peace.
www.slovenly.bandcamp.com/subsonics-in-the-black-spot-lp
Simon M.