Grayson Perry's 'Disneyland' home to be built in Essex village 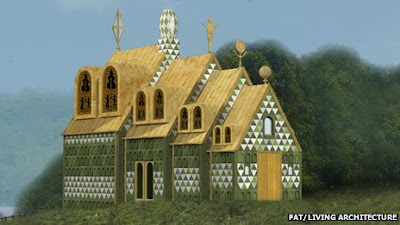 A holiday home designed by a Turner Prize winning artist, likened to Disneyland by some and hailed as "fascinating" by others, is to be built in a small Essex village.

Grayson Perry's design, which he says aims to "reflect the different aspects" of his home county, has been approved by Tendring District Council.

People opposed to the Wrabness building had called it a "monstrosity" and said it was "more suited to a theme park".

Construction is due to start next year.

The artist, who was born in Chelmsford, designed the building with Fashion Architecture Taste (FAT).

It will feature his artwork and be made available for the public to stay in via Living Architecture, which also oversees the Balancing Barn and Dune House buildings in Suffolk.

Mr Perry, whose vases helped him win the Turner Prize in 2003, said the idea for the two-bedroom house "relates to buildings put up as memorials to loved ones, to follies, to eccentric-home-built structures, to shrines, lighthouses and fairytales".

Wrabness Parish Council was amongst those to object to the plans, saying it would increase traffic and that it did not fit in with the landscape.

Mrs Pauline Marsh lodged an objection with the council saying the house, which will look out over the Stour, was "completely out of keeping with our beautiful estuary, rather like Disneyland".

Mr Perry said the design is sympathetic to the area and "does not look to dominate its surroundings".

"I have a deep fondness for Essex and I am happy to invest a large chunk of my energy and time into a project that I feel will add greatly to the cultural standing of the area," he said.

Tendring District Council said it had previously granted planning permission for a larger building to be built on the plot, but it did not go ahead.

More than 100 comments were submitted to the council, which said the positive reponses "far outweighed" those objecting to the plans.

The house could be completed in 2014.