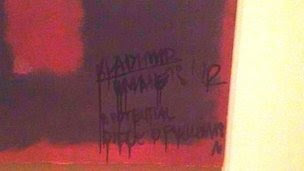 A man has been arrested in connection with the defacement of a Mark Rothko painting at the Tate Modern in London.

The 26-year-old was held in Worthing by Sussex Police at about 21:00 BST on suspicion of causing criminal damage, the Metropolitan Police said.

Earlier a Russian man named Vladimir Umanets who has claimed responsibility for defacing the artwork told the BBC: "I'm not a vandal."

The BBC understands the arrested man is Mr Umanets.

Words were scribbled with black paint on the painting, Black on Maroon, on Sunday.
The artwork is one of Rothko's Seagram murals.

Speaking to the BBC before the arrest, Mr Umanets, founder of a movement he calls Yellowism, claimed to be responsible but denied his actions were criminal damage.

He said he was a big fan of the artist and added: "Art allows us to take what someone's done and put a new message on it."

Works by the modernist US painter have sold for tens of millions of pounds.