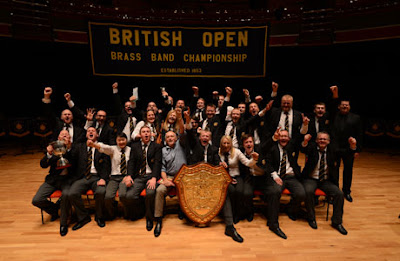 Foden's brass band from Cheshire has become the first band for 12 years to win the National Championships and the British Open in the same year.

The two contests are seen as the most prestigious in the highly competitive brass band world.

Foden's completed the "double" after scooping the National Brass Band Championships of Great Britain at the Royal Albert Hall in London.

Based in West Yorkshire, Brighouse and Rastrick were denied their third consecutive win at the National Championships.

Some 600 bands enter the annual competition through eight regional qualifying heats. The best go through to the final, which attracts around 4,000 fans per year at the Albert Hall.

Foden's principal trombone player John Barber said: "Just to win any of the majors is a huge achievement, but to do the double is such a unique thing. We're all immensely proud."

Foden's band was formed in Sandbach at the start of the 1900s by local industrialist Edwin Foden as the Fodens Motor Works Band. The band has continued since the factory shut in 1999.