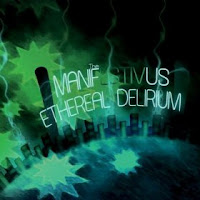 They’ve only been together for a year, but Richmond, Virginia’s The Manifestivus seem to have got their act together extremely quickly. Their debut album “Ethereal Delirium” is an assured, confident collection with a well-defined ‘band’ sound. The group formed around the talents of singer-songwriter-guitarist Bryce McClellan, and although his songs are placed firmly centre stage, the rest of the band, Tristan Dougherty (bass), Alexander Lee (violin), Clifton McDaniel (guitars) and Brian Wiltz (drums), play their socks off, creating a supremely calm, chilled, indie-psychedelic setting.

It’s an album that seeps into the consciousness. McClellan’s songs appear at first, almost too slight, too delicate to register, but rather than dismiss them, the urge is to care for and nurture them. Essentially, to really listen, and the rewards are forthcoming. Indeed, he’s got plenty to say and he delivers with the gentlest of melodic barbs, which repeatedly catch.

They set the tone on opening track “Astonishment” – guitars chime, a sweeping violin colours the spaces, and McClellan’s hushed vocal, occasionally double tracked, unfurls the tale. “My Thoughts and Their Spores” releases a classic West Coast country rock influence, without compromising their core style, and it’s just wonderful. Later tracks “Cosmically” and “Sink in the Mood” seem a little more strident and emotionally wrought, and provide even more depth to an album that already far too easy to drown in.
www.facebook.com/TheManifestivus
www.themanifestivus.bandcamp.com
Rob F.