Review: Chuck Leavell - Back to the Woods

Chuck Leavell - Back to the Woods (Evergreen Arts) 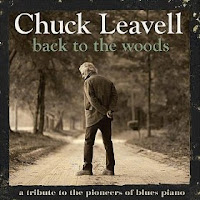 With a pedigree as a key (not incidental) member of the Allman Brothers Band and long-time Stones sideman it comes as no surprise to find that ‘Back to the Woods’ showcases a craftsman at the peak of his powers. Exquisitely restrained but hugely erudite keyboard playing breathes new life into a well-chosen selection of blues classics, most of which (by the likes of Memphis Slim, Skip James and especially Leroy Carr) originate in the years 1929 to 1936, giving them a genuinely contemporary feel without ever distracting from the original character of the songs.

As a pianist of international renown Leavell has rarely stepped up to the mic, but his laconic lead vocals on all bar three tracks are adequate for the job in hand, giving their best account on a mesmerising rendition of Charles Calhoun (via Ray Charles)’s ‘Losing Hand’. Impressive guests including John Mayer, Keef and Candi Staton make valid contributions without threatening to steal the show. He may have an enviable phone book, but this is no ‘and friends’ exploitation; it’s Chuck’s gig and better for it.
www.chuckleavell.com
www.evergreenarts.com
Neil B.