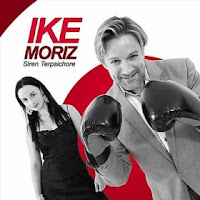 Ike’s back! Not that he’s been away for too long. His brand new album is a collection off Latin jazz and swing songs, all written and composed by Moriz. It’s relatively rare for a collection like this not to lean heavily on standards, the classic songs written in the ‘40s and ‘50s, but it’s important to remember Moriz began his career as a singer-songwriter, fronting rock and pop bands in London. He’s now back in his native South Africa, where he’s proved himself an adaptable performer, recording a number of solo albums in various genres, and he continues to be a favourite on the Cape Town 5-star hotel circuit.

I’m sure had he been writing these songs 50 or 60 years ago, some would have become standards in their own right, and would have been sung by the great vocalists of the day – Ella Fitzgerald, Sarah Vaughan, Sinatra, etc. Lead track “Autumn Moon” is an absolute stunner, and a laid back, easy Rat Pack vibe envelops both the delivery and the song’s sentiments; a perfect start. “Sweet Sweet Jane” and “Moonglow” are equally notable, the latter featuring a sublime juxtaposition of clarinet with Moriz’s smooth vocal, and he finishes with an Abbey Road mix of “Angie Blue”, a highlight from his 2011 “Still” EP. In-between there are two wonderful, original Spanish language songs, sung with an authentic, properly accented voice and plenty of Latin panache.
www.ikemoriz.com
www.facebook.com/moriz.ike
Rob F.