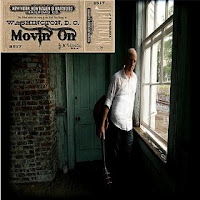 Boyce Callahan has been involved with music from an early age; on piano, picking out tunes he heard on the radio while still a toddler, he began writing songs and performing them when he went to college. A Nashville recording contract soon followed, but he gave it up when his son was born, but couldn’t stay away. He’s been a high school music teacher, producer and engineer, and he’s recently built his own studio, where “Movin’ On”, the third album of his career was produced, recorded, mixed and mastered, by Callahan alone.

Inspired by the Southern music he heard being played in and around his Alabama home, he lists his prime influences as blues, rock, soul, gospel and bluegrass, which are pretty much the bedrock of what often gets called Americana. Callahan certainly falls into that catchall category and he sings his songs with a cultured country-soul twang, which matches his pristine guitar playing. Contemporary singer-songwriters such as John Mayer also play their part in informing and shaping Callahan’s style, but there’s an earthy spirit to much of what he does that transcends simple comparisons. I like a lot of what Callahan’s achieved here, and songs like the bluegrass, rock and soul mix of the title track, or the fuzzy, funky roots-rock of “Midnight Train” would be perfectly suited to radio. His take on Michael Jackson’s “Smooth Criminal” may well provide the breakthrough.
www.boycecallahan.com
www.facebook.com/Boyce-Callahan
Tony S.