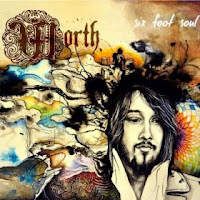 With 24 tracks and a running time just short of 79 minutes, Christopher Worth’s debut solo album “Six Foot Soul” is an expansive, sprawling record, difficult to fully grasp in one sitting. Of course, back in the old, pre-digital days, it would have been a double-album set, and however big a fan we were, we would have rarely listened to “Blonde On Blonde”, “Exile On Main Street” or “The White Album” in one uninterrupted session. Instead we would have cherry-picked favourite sides, wearing out the grooves, and flipping the discs only occasionally. We don’t seem to listen to albums in the same way these days; it’s either odd tracks on playlists or the whole thing, though “Six Foot Soul” seems to work, whichever way it’s played.

In 2007 Worth formed the band NIAYH (an acronym for “Now Is All You Have”), who are often compared to Pink Floyd. Solo, there’s a distinct folk, soul and jazz edge to much of his material. I’ve not seen his name mentioned anywhere else, but Shuggie Otis came to mind as “Six Foot Soul” gradually revealed its charms, though there’s also an element of the American jam band tradition present throughout the collection.

As already stated, it’s a lot of music to be cogitated and digested in one go, but it’s hardly a chore. Worth’s got an easy voice to live with and his band play it funky and lively, or mellow and chilled with equal aplomb. Sampled voices and non-musical interludes agreeably break up the sequencing, emphasizing individual songs, of which there are ample highlights; “Come Out Into the Light” and “Captain Finger” are both particularly laudable, but taken as a whole, I can wholeheartedly recommend every last second.
www.worth-music.com
www.worthmusic.bandcamp.com
www.facebook.com/weareworth
Rob F.