Review: Shred Kelly – In The Hills

Shred Kelly – In The Hills (Independent) 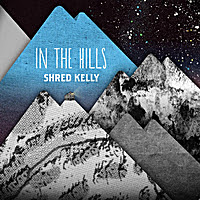 Shred Kelly is a five-piece progressive mountain string band. As you can imagine, I don’t get to type that too often. Most young string bands fall into two camps; they’re either desperately trying to sound authentic and ancient, like they recorded their album in 1959, or they’re ex-punkers trying to re-invent the wheel with extra electrics and double the attitude. Shred Kelly appears to be neither. They’ve been listening to Arcade Fire, The Decemberists, and maybe a little Radiohead, and the craggy road they’re moving down is one decidedly less travelled.

The call the East Kootenays of British Columbia home, a region in southwest Canada with more than its fair share of mountains and wilderness. The terrain is reflected in their music and words, but equally, they weren’t raised in a vacuum, and outside influences litter their approach. For example, opening track “New Black” sounds perfectly contemporary. Strip away the banjo and what’s left is just a great indie rock song. “Cabin Fever”, is infinitely rootsier, but still straddles genres, and its upbeat rhythm and enthusiastic air deserves a sizeable audience. Both singers, Tim Newton and Sage McBride, possess big expressive voices that add considerably to the group’s sound, and the latter’s keyboards add another subtle dimension.
www.shredkelly.com
www.facebook.com/shred.kelly
Simon M.