Review: Patrick Ellis – Under The Influence

Patrick Ellis – Under The Influence (Independent) 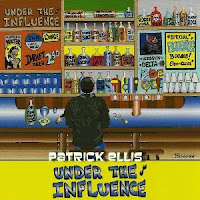 Patrick ‘Bluefrog’ Ellis earned his blues nickname when stationed with the US Navy in Germany. He was a diver by day and a bluesman by night, playing gigs at local expat bars. His recording career goes back to 2005 with the release of the “Soulful Of Blues” album, and although he’s taken seven years to release its follow-up, he’s been busy, playing live wherever possible, headlining his own shows and opening for major blues artists like Robert Cray.

The title “Under The Influence” refers to the artists who have inspired him to make music. As a bluesman who sings, writes, plays guitar and harmonica, there’s no shortage of musicians who fit the bill. He lists a range of artists, from Little Walter and Sonny Boy Williamson, to Stevie Ray Vaughan and Keith Richards, and it’s the latter pairing that provides the easiest frame of reference. “Under The Influence” is a feisty hybrid of blues and rock; Ellis is an accomplished musician, and his band is equally skilled, with plenty of experience. Standout tracks are copious: “Steam Heat” is an upbeat grinder with Ellis on exceptional harmonica form – the Red Devils’ “King King” recording springs to mind. “Mercury Blues” is full of character, and features a fierce chugging riff and an aged vocal effect, like it’s emerging from an old valve wireless in 1959, and they do a great job on The Mighty Flyers’ “Love Doctor”, with lead guitarist John Flynn in particularly fine fettle.
www.bluefrogblues.com
Rob F.