Review: Melissa Crabtree – The Day I Fell In The Water

Melissa Crabtree – The Day I Fell In The Water (Independent) 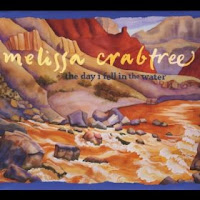 Melissa Crabtree is fortunate to maintain two careers; the first as wilderness guide in her home state of Colorado and secondly as a professional musician, singer and songwriter. It’s no surprise that the former is a major influence on the latter. Indeed, local flora and fauna, and the landscapes they habitat, provide the themes for many of her songs, and even the sounds and ambience of nature are reflected by the instrumentation; a plucked mandolin replicates the flutter of wings on “Bees” and the bass on “Water Canyon” almost induces feelings of vertigo.

Green issues, of course, are close to her heart, and much to the fore in her writing. When she released her debut album “Off The Beaten Path” in 2002, she toured America in a vegetable oil-powered van, was featured in the “Fields Of Fuel” documentary and produced a compilation album to draw attention to fossil fuel issues. On “The Day I Fell In The Water” songs like “Spirit Mountain” and “Daisies Talk” reiterate her standpoint, but they’re also great folk songs, beautifully played and sung in a rich, rootsy voice. First track “Sheila” includes all those attributes, together with a few others. It’s a tremendous four and a half minutes, which deserves prominence on any Americana fan’s playlist. The title track is haunting and atmospheric and evocative of something that can’t quite be seen or touched. It’s a splendid collection, and fans of Mary Gauthier and Iris DeMent should probably investigate further.
www.melissacrabtree.com
www.soundcloud.com/melissa-crabtree
Rob F.