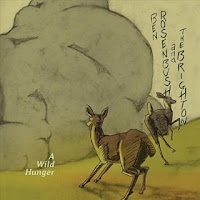 Minneapolis singer-songwriter Ben Rosenbush and his band, The Brighton, have been honing their style for a few years, and you know all the good things they say about practice (and honing). They released their debut in 2010 to much acclaim and a respectable placing in the CMJ top 200 listings for the year, and their songs of love and desperation struck a chord with an audience just coming to terms with the many gentle pleasures offered by the new indie-folk.

For their second record, the eight band members build layers of sound that are complex and dense, yet they retain an calming, easy sound. Rosenbush’s voice possesses a delicate fragility that is respected and responded to by his band mates, who never outmuscle or overpower his subtle tones. “A Wild Hunger” begins with “The White Stone”, which leads with a fractured piano refrain, and a melody that’s almost Mccartney-esque, circa “Ram”, or something similar. “Duluth” is equally impressive. Propelled by a rolling acoustic guitar riff, steel guitar provides emphasis and the positive, sunshine vibes radiate goodness. Though they take on plenty of serious themes, there’s an air of hope and redemption present throughout the collection, and perhaps that’s best represented on “Cowboy”, a tale of loss and unwanted change, yet it’s optimistic and unexpectedly positive. A great tune helps.
www.benrosenbush.com
www.facebook.com/Ben-Rosenbush-The-Brighton
Rob F.