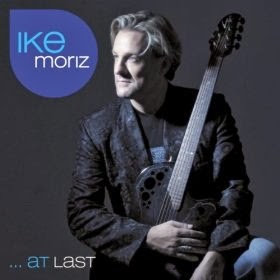 Ike Moriz is one tricky artist to pin down. He originally made records in London back in the early noughties as part of a new wave of pop that sprung up in the wake of Britpop, though he always seemed to take the majority of his musical leads from the pop classicism of the preceding decades.

Since then he’s relocated to his home-country of South Africa, where he’s made a name for himself as an interpreter of the Great American Songbook - and has followed a stylistic bent with roots in the big bands of the ‘40s and ‘50s, and vocalists like Frank Sinatra and Dean Martin. By my reckoning “At Last” is his 14th long player, and his first since 2012’s “Siren Terpsichore”. Now Moriz has taken a new musical direction, and has discovered a whole new set of roots to explore.

“At Last” is a sincere (and utterly fascinating) take on a blues style that borrows from both the British boom of the late ‘60s and early ‘70s, and the jazzier sounds that he’s recently surrounded himself with. Familiar titles litter the tracklist; “Georgia On My Mind” is super smooth and elegantly soulful, while “Hound Dog” owes something to Elvis, insofar it rocks, but it swings, too, and Moriz nails both the arrangement and performance.

Opening cut “The Devil Is Real in Your Mind” features some terrific guitar work, and includes enough bad blues vibe to steer us sensible folk away from the crossroads after dark, while the title track relies heavily on piano, and feels dense and heavy like a Southern heat wave. The album concludes with “You Are My Sunshine”, its upbeat message enhanced by fluttery horns and Moriz’s playful tones.

It’s good to have him back, whatever style he’s playing, and I’m already looking forward to the next installment.
www.ikemoriz.com
www.facebook.com/moriz.ike
Ike Moriz CD Baby Page
Rob F.
Posted by Bangs at 3/12/2014 12:24:00 pm No comments: