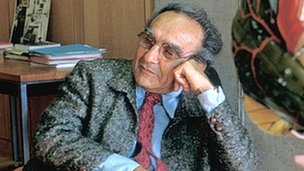 The scientist and broadcaster Jacob Bronowski is to be honoured with a blue plaque in Hull, marking his ties with the city where he once taught.

Dr Bronowski, who died in 1974, is best remembered for presenting the 1973 BBC TV series The Ascent of Man.

The plaque will be unveiled on Monday at 29 Hallgate in Cottingham, where he lived between 1934 and 1942 when he was a lecturer at the University of Hull.

The unveiling follows a two-year campaign by humanists in Hull.

The campaign for a plaque in the city began after diaries discovered by Dr Bronowski's daughter, the academic and broadcaster Professor Lisa Jardine, showed he had lived in Hull.

According to the diaries, the academic moved to the city in 1934 to lecture in mathematics at the University College of Hull.

"He's known as a mathematician and a scientist who was interested in physics and biology, but he was also a poet," said Mr Stephenson.

"He was a multi-faceted person who was involved in the broad area between the arts, the sciences and the social sciences. He was a really interesting character."

Dr Bronowski, who died in August 1974 aged 72, is known to have inspired figures such as Carl Sagan, who went on to make the TV series Cosmos, and David Attenborough, said Mr Stephenson.