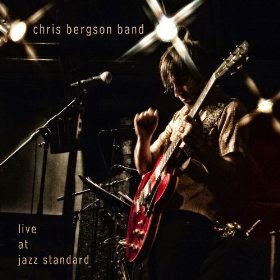 Equalling the critical success of previous releases ‘Fall Changes’ and ‘Imitate the Sun’ (numbers one and two respectively in Mojo magazine’s Blues Albums of the Year for 2009 and 2011) will have been a daunting challenge for the Chris Bergson Band; but while a stop-gap live album re-treading past glories may have seemed tempting and risk-free, ‘Live at Jazz Standard’ has an altogether weightier ambition.

Still a well-kept secret in commercial terms, Chris Bergson is a serious and important artist. As the popular music of the twentieth and twenty-first centuries matures to the point where its narrative can be accurately documented and its distinctive cultural significance finally understood, the architectural foundations upon which it was first built call for expert curatorial support. Bergson is one of a dwindling number whose approach to that task is at once respectful, sophisticated and progressive.

Critically, although embedded unashamedly in blues, soul, jazz, folk and country, he neither wants to pickle them in aspic nor dress them up in gaudy rags as if for a children’s party.

In drawing from a deep reverence and intuitive affection for the indigenous roots of American music Bergson follows the altogether more nuanced lead of Dr John, the Allman Brothers, and Little Feat – the Grateful Dead even – who have moved American roots forward through substantial yet sustainable increments rather than speculative leaps, combining prowess and dexterity with awareness and erudition.

Hitherto, Bergson has built sensibly and to good effect on the Woodstock Vibe template pioneered by The Band, something few do well. This recording sees the start of a careful but significant progression, which gives him a more distinctive shape and individual voice. Stylistically, the set presented here (from which only two songs, ‘Mr. Jackson’ and ‘Gowanus Heights’ feature on recent studio albums) is altogether bluesier and more soulful, with less of a default to jazz. A change of keyboard player heralds more prominence for the organ and less bar-room piano; and horns that previously honked now seem to blast. Both features add welcome depth to the overall sound.

Bergson’s own guitar playing, always excellent, is more upfront than before; and in showcasing a range from acoustic delta to full-on electric rock it often acts in tandem with his vocal as call-and-response. Bergson’s singing too has always been a remarkable asset, but past recordings don’t adequately prepare for a performance which is one moment Brook Benton or Bill Withers and the next the Tom Waits of ‘Christmas Card from a Hooker in Minneapolis’. ‘High Above the Morning’ could well be the perfect starting point to hear all this at once, a reflective and soulful song with voice and guitar dueting like Marvin Gaye and Tammi Wynette, perfectly underpinned by a wash of brass and organ.

The songs themselves are the familiar combination of character driven stories (including the aforementioned ‘Gowanus Heights’ Altmanesque cast of Brooklyn faces, and the outstanding ‘Christmas Time in Bethlehem, PA’), and personal musings (such as deep soul ballad ‘Chloe’s Song’), occasionally laced with laconic humour (as is ‘Sometimes It’s You’). Range is impressive too. Opener ‘Greyhound Station’ hits the tracks running with a blues tour-de-force matching muscular guitar licks with wall-of-sound horns, to be hotly pursued by the Stax-referencing soul-funk of ‘The Only One’; while ‘Heavenly Grass’  pays tribute of a different kind to the writer’s self-declared influences of Son House, Lightning Hopkins, and Skip James.

Of the available raw ingredients Bergson’s preference for merging blues soul and jazz (as against, say, Springsteen’s leanings towards country, folk and rock and roll) may make his work less of a commercial proposition than it deserves; but with the growing confidence, immaculate playing, raw talent and flawless integrity on parade here, a wider audience and recognition has to be his due before long.
www.chrisbergson.com
Neil B.