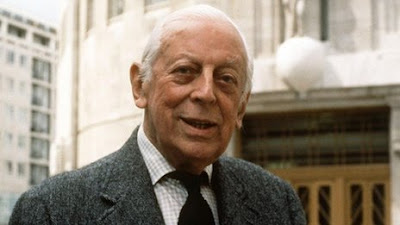 A new online archive featuring more than 900 of Alistair Cooke's celebrated Letters From America is being launched by the BBC.

Broadcast on Radio 4 between 1946 and 2004, it is one of the world's longest running speech radio programmes.

The archive covers some of the biggest events in recent US history up until Cooke's death in 2004.

The 920 episodes will be available on the Radio 4 website from 1 November, as the BBC celebrates 90 years of radio.

Reflecting social, political and cultural aspects of American life, the series had a notably diverse agenda.

"I covered everything from the public life of six presidents to the private life of the burlesque stripper, from the black market in beef to the Black Panthers; from Senator Joseph McCarthy's last stand to the massacre of Muhammad Ali by Joe Frazier," wrote Cooke in his book, America.

"I can see Alistair, as I listen afresh, telling his stories and drawing in listeners with his easy authority and knowledge of history, his reporting skills and his passion for America," said Williams.

She added: "There are so many letters to choose from - for instance the one he broadcast having been a witness to Bobby Kennedy's assassination, from his position in the pantry next to the ballroom; the shots, he said, sounded 'like someone dropping a rack of trays'."

"It's an immensely rich collection of programmes, which takes listeners back to the early days of BBC Radio through one of its most distinctive voices," added the BBC's director of Audio and Music, Tim Davie.

Cooke was born in Blackpool in 1908, but studied at Yale and Harvard in the early 1930s where his fascination with America began.

He originally convinced the BBC to take him on as a film critic, after spending a summer in Hollywood where he befriended Charlie Chaplin.

His first programme was broadcast on 24 March 1946, when the item was called American Letter.

Over 58 years Cooke revealed intimate details of American life and lives in his uniquely conversational style.

"From the golden age of '50s America, to the disillusionment of the Bush years via JFK, civil rights and Watergate, this is an astonishing record of the great years of the American century," said Zillah Watson, who produced the Cooke archive.

Radio 4 and BBC World Service will also broadcast a four-part series called In Alastair Cooke's Footsteps - in which presenter Alvin Hall travels across America to find out whether Cooke's letters are still relevant today.