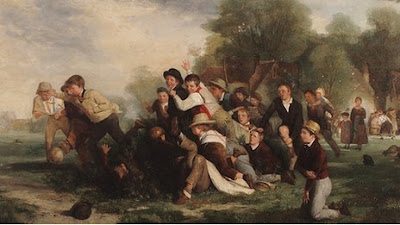 A mission to photograph all 210,000 oil paintings in public ownership in the UK has come to an end.

Only around 20% are ever on show at once but the entire collection is being made available on the BBC Your Paintings website.

The final photos have been taken at Manchester's National Football Museum.

The paintings there range from a 10ft (3m) depiction of former Manchester United footballer Eric Cantona as Christ by Michael Browne, to Thomas Webster's image of a rural game of football in 1839.

Public Catalogue Foundation director Andrew Ellis recently told the BBC Radio 4 Today programme: "Art is made to be seen and we as a nation have a wonderful public art collection.

"But about 80% of these paintings are not on public view. Collections and museums just do not have the space to show all of those paintings.

"And at the same time, the vast majority, probably two thirds of these paintings, have not been photographed. So this project changes that."

The artists range from Leonardo Da Vinci to LS Lowry and the locations of artworks include fire stations, courts, libraries, a former nuclear bunker, London Zoo and a lighthouse - as well as major museums and art galleries.

Early works by leading artists, including David Hockney, Chris Ofili and Tracey Emin, have also been found in the collection of the Royal College of Art.

Culture minister Ed Vaizey said: "The inclusion of the National Football Museum's 54 paintings marks the completion of an ambitious project that is a world first.

"Never before has an entire nation's oil paintings been made available online."
The foundation is now considering moving on to catalogue the country's sculpture collection.
Source: BBC