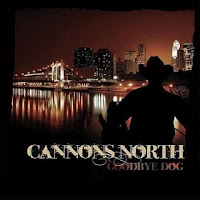 Minneapolis has always had a healthy music scene, and since the mid ‘80s and the rise of The Jayhawks, alt. country / Americana has been one of the dominant genres in the city. Cannons North represent one of the new generation of bands picking up steel guitars and mandolins, and with four singer-songwriters in their ranks, they’ve got plenty to say.

So, with four out of five members contributing songs it’s hardly surprising that their debut album has appeared only a year after their inception. Perhaps it’s a little more unexpected that it sounds so fully formed. There’s a genuine group dynamic at play. Though it’s easy enough to separate the different singers, and even their writing styles, “Goodbye Dog” hangs together extremely well. Opening cut “Cannonball Express” displays many of the same characteristics that defined the first Wilco album, an uncomplicated country-rock style, played with genuine enthusiasm and a lot of heart. “Drive” feels like a call to arms, a Cannons North theme song with an in-built love of the road, and the opportunity to spread the joy. The title track’s a country tearjerker – the singer really loved that dog – and “Not The Life” provides another moody, brooding highlight. Good songs, good singers and good musicians – be sure to check out “Goodbye Dog” and dig the new breed.
www.cannonsnorth.com
www.facebook.com/Cannons-North
Rob F.