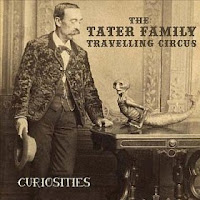 Local, North Carolina band Tater split in 2009, leaving singer / songwriter Luke Edwards with a bagful of songs but no band to play them. Thus The Tater Family Travelling Circus was formed, the songs were revamped and many a gig was played. “Curiosities” is their debut long player. It’s a rollicking ride and they spike their songs with plenty of classic references, from Lynyrd Skynyrd and Marshall Tucker Band, to more recent bands like the Drive-By Truckers.

So, songs for drinkin’ and drivin’ though not advisable at the same time, though you’ll be sorely tempted when the best of “Curiosities” kicks in. “Spinnin' Round” starts slow and haunting, but when the band turn-up you’ll remember that bottle caps can be lifted with car keys. “Anatomy” is a re-write of “Dem Bones” with louder guitars and more smiles and “Sweet Carolina” is a delight, a rolling, rocking love song, with multi-instrumentalist Ashley Conine doing the business on harmonica. In any of the above sounds appealing, “Curiosities” won’t disappoint.
www.facebook.com/Tater-Family-Travelling-Circus
www.reverbnation.com/taterfamilytravellingcircus
Tony S.