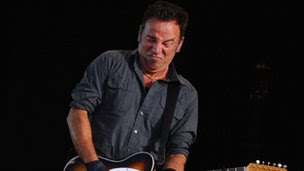 Live Nation may pull out of staging concerts in Hyde Park in London because of a dispute over the tender process.

The live music company has filed a letter of complaint to The Royal Parks raising "serious concerns" about the tender and bid process for the new four-year contract up to 2017.

It said it is "focusing on alternative venues" while it awaits a decision.

Live Nation has brought the likes of Paul Simon, Madonna, Rihanna and Live 8 to Hyde Park over the past decade.

It was also responsible for 25 days of events at the London venue as part of the London 2012 Festival supporting the Olympics.

In July, fans at this year's Hard Rock Calling event were bemused when Bruce Springsteen and Sir Paul McCartney's microphones were switched off during a duet.

Live Nation later issued a statement saying it was "unfortunate" the performance had been "stopped right at the very end".

It said a 22:30 BST curfew had been "laid down by the authorities in the interest of the public's health and safety".

The Guardian reported it understood Live Nation had been "highly critical" of The Royal Parks tender document, claiming it did not recognise the complex logistics and costs associated with running big events in a central location in London.

The Royal Parks, a government agency within the Department for Culture, Media and Sport which is managing the tender process, declined to discuss any details until the process was complete.

It said the process was "ongoing" and it would "not be appropriate" to comment until a decision had been reached.

In a statement to the BBC, Live Nation, which owns the ticket purchasing company Ticketmaster, said it was looking forward to a "detailed response" from The Royal Parks and "in the meantime" was looking at other locations for its concerts and festivals in 2013.

Since 2008, complaints about noise in Hyde Park almost doubled promoting a review of the venue's licence to host events.

In February this year, Westminster Council took a decision to reduce the number of concerts held annually at Hyde Park from 13 to nine, after complaints from residents.

The new measures come into effect next year.