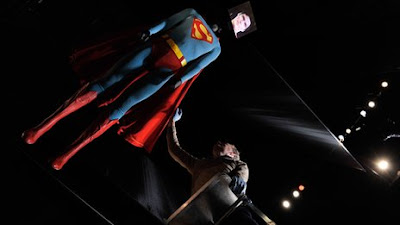 Seven hundred film costumes, assembled by the British Film Institute (BFI) over 20 years, are to be transferred to the Victoria and Albert Museum (V&A).

The announcement was made to coincide with the opening of the V&A's Hollywood Costume exhibition, in which more than 130 classic outfits are displayed.

They include a Superman costume worn by Christopher Reeve and a dress Marilyn Monroe wore in Some Like It Hot. Both were previously held by the BFI.

At a press launch on Wednesday, guest curator Professor Sir Christopher Frayling said the BFI's "generous" donation meant the V&A was now the home of "the national collection of film costume".

Costumes designed by Professor Nadoolman Landis are among those featured in the exhibition, which spans three ground-floor galleries at the V&A's South Kensington home.

They include those worn by Harrison Ford in his role as daredevil archaeologist Indiana Jones and the black suits sported by the title characters of The Blues Brothers, directed by her husband John Landis.

Other items on display include comic-book superhero outfits worn by Batman star Christian Bale, Spider-Man actor Tobey Maguire and Michelle Pfeiffer, in her guise as Catwoman.

For four weeks, the exhibition will also play host to the original ruby slippers Judy Garland wore in The Wizard of Oz, which have left the US for the first time thanks to a loan from the Smithsonian's National Museum of American History in Washington DC.

According to Professor Nadoolman Landis, the exhibition provides a chance "to explore the most beloved characters in Hollywood history and gain insight into the role of the costume designer".

"The design of costumes for films is a distinctive form of design which is often taken for granted or misunderstood," added Sir Christopher. "This exhibition presents the ideal opportunity to set the record straight."

"It's wonderful to be able to give our nascent costume collection a new home at the V&A," said Amanda Neville, the BFI's director.