Review: Ian Hunter and the Rant Band - When I’m President 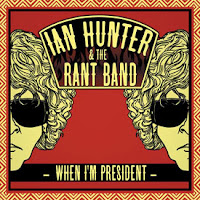 To many long-time rock fans Ian Hunter has seemed like the perfect combination of Bob Dylan and the Rolling Stones  – where lyrical singer-songwriter meets full on rock ‘n’ roll band. Despite the recent reunion shows Hunter has left the Bowie Dust-sprinkled suits and platform boots of Mott far behind, and his recent work has been characterised by a period of pronounced maturity. Now in his 74th year on the planet ‘When I’m President’, third instalment in a trilogy which began with 2007’s estimable ‘Shrunken Heads’, shows no sign of him letting his foot off the pedal.

While there are no ballads here to compare with the earlier collection’s ‘When the World Was Round’ or ‘Read ‘em and Weep’ (the outstanding ‘Ta Shunka Witco’ notwithstanding, as it’s a different animal altogether) the resurgence of Hunter’s inner-rocker more than compensates. While the opening section of ‘Fatally Flawed’ wouldn’t seem out of place on any of Dylan’s new century albums, once the chords come crashing in even this reverts to the albums default setting:  a deep rumble and an audible flexing of muscle followed by a nuclear blast of energy and commitment. In fairness, many of Hunter’s solo albums (like Richard Thompson’s) suffer regular inconsistencies; immense songs often sit side by side with fairly pedestrian ones. In that respect this new set makes for a more consistent collection than any other Hunter album I can bring to mind, and it’s difficult to find a weak link in a chain that features ‘When I’m President’, ‘What For’, ‘Black Tears’, ‘Saint’ and ‘Just the Way You Look Tonight’ – classics in waiting all – as its mid-section.

Like other recent releases there’s a distinct awareness of an outside world that’s going to hell in a bucket, but a key difference here is that he alludes to it rather than writing about it directly, and the songs are more convincing for it. In all, this is a record that both excites and delivers and may be the finest achievement of the artist’s long career. With Mitt Romney chillingly resurgent in the latest polls we might prefer ‘When I’m President’ to be as much prophesy as mere album title; but if we find ourselves drawn further into a place where only the bad guys win then music of this quality may be one of the things we need to help us get through.
www.ianhunter.com
Neil B.