Review: John 3:16 - Visions of The Hereafter: Visions of Heaven, Hell and Purgatory

John 3:16 - Visions of The Hereafter: Visions of Heaven, Hell and Purgatory (Alrealon Musique) 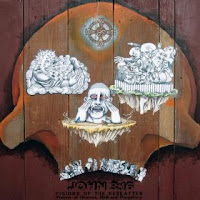 Naming himself after the most widely quoted verse from the Bible, John 3:16 (chapter 3 verse 16 – which reads “For God so loved the world, that he gave his only begotten Son, that whosoever believeth in him should not perish, but have everlasting life.”) Philippe Gerber instantly positions himself as either follower, questioner or controvert.

The brooding industrial processing and hard edges that dominate “Visions of The Hereafter” steer one to denote the agony and anguish associated with hell but some of the titles and track juxtapositions tend towards subverting such clichéd preconceptions. “Abyss of Hell / Clouds of Fire” seems more eloquent than its immediate precursor, “Throne of God / Angel of The Lord” and the gothic, aggressive metal “The Inner Life of God / the Father, The Son and the Holy Spirit” is perhaps another disconcerting mismatch.

It is obviously for the listener to decide and after all one man’s heaven is another man’s hell.
www.alrealonmusique.com
Willsk