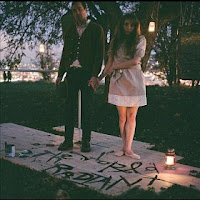 In 2011 Ross McLeron began a recording project to commemorate the marriage of a close pal. I think we can all agree, as wedding presents go, that sort of gesture ranks considerably higher than napkin rings or a toaster. Every sound, vocal and instrument that can be heard on the debut World Radiant collection was written and performed by McLeron, which makes the gift all the more personal. I should mention, since this album’s release, new recordings have been issued, and The World Radiant are now a five-piece band.

It’s an intimate, not-quite-lo-fi record, with mostly introspective lyrics that enmesh themselves, like early Elliott Smith songs, or Lou Barlow at his most wistful and pensive. I don’t suppose these tracks were originally intended to reach so wide an audience, but much of the material McLeron has produced deserves to be heard. He writes measured, meditative tunes and his words reflect perfectly the nature and spirit of gentle, inward contemplation and fresh beginnings. “Set Sail”, is a lively launch, and provides the most palpable reference to a new (married) life.  “Broken Things” is almost ethereal, with what might possibly be a saw adding extra atmosphere. “Apparitions” employs a similar effect, and best of all, the title track, McLeron almost speaks the love incantation, and it’s genuinely moving.
www.theworldradiant.com
www.facebook.com/TheWorldRadiant
www.rossmcleronandtheworldradiant.bandcamp.com
Rob F.