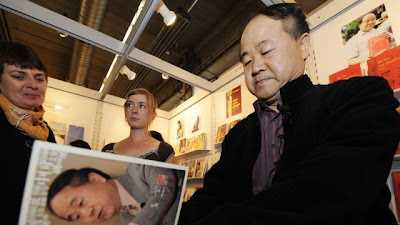 Chinese author Mo Yan has been awarded the 2012 Nobel Prize for literature.

A prolific author, Mo has published dozens of short stories, with his first work published in 1981.

The Swedish Academy praised his work which "with hallucinatory realism merges folk tales, history and the contemporary".

The 57-year-old is the first Chinese resident to win the prize. Chinese-born Gao Xingjian was honoured in 2000, but is a French citizen.

Presented by the Nobel Foundation, the award - only given to living writers - is worth 8 million kronor (£741,000).

"He has such a unique way of writing. If you read half a page of Mo Yan you immediately recognise it as him," said Peter Englund, head of the Academy.

He said Mo had been told of the award, adding: "He was at home with his dad. He said he was overjoyed and terrified."

He began writing while a soldier in the People's Liberation Army (PLA) and received international fame in 1987 for Red Sorghum: A Novel of China.

Made into a film which won the Golden Bear at the Berlin Film Festival in 1988, the novella was a tale of the brutal violence in the eastern China countryside where he grew up during the 1920s and 1930s.

Favouring to write about China's past rather than contemporary issues, the settings for Mo's works range from the 1911 revolution, Japan's wartime invasion and Mao Zedong's Cultural Revolution.

"He has a very impressive oeuvre," Michel Hockx, Professor of Chinese at the University of London, said.

"He has a large readership and he addresses the human condition in a way in which the Nobel Committee likes to see."

Mo's other acclaimed works include Republic of Wine, Life And Death Are Wearing Me Out and Big Breasts and Wide Hips.

The latter book caused controversy when it was published in 1995 for its sexual content and depicting a class struggle contrary to the Chinese Communist Party line.

The author was forced by the PLA to withdraw it from publication although it was pirated many times.

After it was translated into English a decade later, the book won him a nomination for the Man Asian Literary Prize.

Despite his social criticism Mo is seen in his homeland as one of the foremost contemporary authors, however critics have accused him of being too close to the Communist Party.

"A writer should express criticism and indignation at the dark side of society and the ugliness of human nature," the author said in a speech at the Frankfurt Book Fair in 2009.

"Some may want to shout on the street, but we should tolerate those who hide in their rooms and use literature to voice their opinions."

Mo and the other Nobel laureates for medicine, physics, chemistry and peace, will receive their prizes at formal ceremonies in Stockholm and Oslo on 10 December - the anniversary of the death of prize creator Alfred Nobel in 1896.