Review: October Gold – Into The Silence 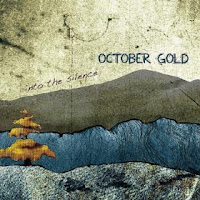 Montreal based October Gold is the pairing of Kit Soden and Aliza Thibodeau, though they’ve expanded their line-up somewhat for “Into The Silence”. The album was originally envisaged as a full-band project and eventually over 20 different instruments were used in the final mix, including a church organ, a harp and a brass quintet. It’s to their credit that all that extra oomph does nothing to distract attention from the main performances, and the collection retains a warm, intimate appeal.

Both Soden and Thibodeau sing, and their vocals in harmony are practically the first thing we hear on the album. Its source track, the intricate, beautifully arranged “Riverside” is almost reason enough to invest in their joint musical vision. Their self-confessed influences are nearly all contemporary, but on this first track at least, there’s something of the joie de vie of those early Simon and Garfunkel sides at play. Things immediately get more serious on “Snow Ghosts”. Thibodeau’s violin melody is intense and somber, but ever so lovely, and “The Well” is magnificently dark, with a moody gypsy-noir flourish. Perhaps they’re at their most compelling on the grandiose title track; epic folk-rock, defined in six and a half minutes.
www.octobergold.com
www.facebook.com/Octobergoldmusic
Rob F.