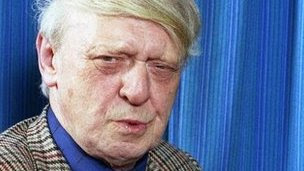 Anthony Burgess, author of A Clockwork Orange, has been honoured with a blue plaque unveiled at the university where he studied.

He graduated from the University of Manchester in 1940 and was awarded an honorary doctorate by the institution in 1987, six years before he died.

Burgess grew up in Harpurhey and Moss Side, before winning a scholarship to Xaverian College.
As an undergraduate he also wrote music including a piano sonata.

The ceremony was proceeded by a trumpet fanfare he wrote as a birthday present for his son - Andrew Burgess Wilson.

Other than a plaque outside the author's former flat in Monaco - where he lived for 17 years - no other monument exists to him, the university said. 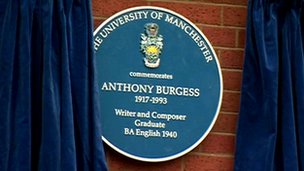 Dr Andrew Biswell, director of the International Anthony Burgess Foundation, said: "I'm delighted that the university has decided to install the first British public monument to Burgess, 50 years after A Clockwork Orange was first published."

The undergraduate John Burgess Wilson - who invented the name Anthony Burgess when he published his first novel - studied English literature at the university from 1937 to 1940.

He went on to write 33 novels, 25 works of non-fiction, two volumes of autobiography, three symphonies and more than 250 other musical works, including a violin concerto for Yehudi Menuhin.

Burgess's 1962 novel A Clockwork Orange depicted the ruthless sexual "ultra-violence" of a teenage gang leader in a lawless society.

He wrote his screenplay for the film in 1969, but it was rejected by director Stanley Kubrick, who created his own take on the text as the basis for the controversial film.

The plaque was unveiled by Prof Jeremy Gregory, head of the School of Arts, Languages and Cultures.