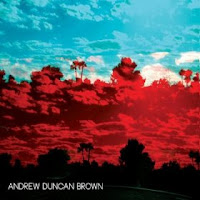 Born in Los Angeles, raised in Indiana and now based in Arizona, Andrew Duncan Brown plays a variety of dusty, wide-screen Americana, which may, or may not, reflect and clarify his desire for mobility and travel. He paid his musical dues playing with an assortment of groups, including The Dirty Rascals, and together they became a regular attraction on the Phoenix / Tempe / Scotsdale circuit. Now solo and with a debut album, both for himself and his new label, Brown gets to allow his songs and ideas free rein. There doesn’t appear to be any shortage of either.

His sound, a blend of folk and roots, old blues and a cut-price Daniel Lanois-esque vibe bring to mind artists like Bon Iver and Fleet Foxes, but there’s enough diversity of style, from the epic soundtracks of “Get-Up, Get-Down” and “All That You Need”, to the vibrancy of “I'll Drink the Blue” and the American Gothic “My Blue Eyed Son” to sweep away any notions of trite association and easy comparison. It’s an album that’s ambitious and forward looking, perfectly attuned to late night spins and long, lonely drives. There’s no doubt in my mind that Andrew Duncan Brown has made a record that should be heard and, indeed, deserves to be heard. If alt. radio catches hold of this album, it won’t be letting go anytime soon.
www.andrewduncanbrown.com
www.facebook.com/Andrew-Duncan-Brown
Tony S.