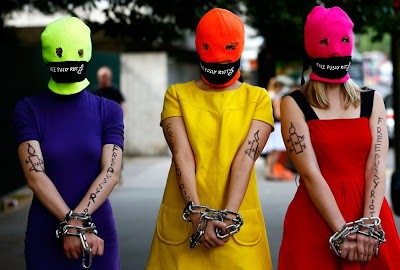 Two convicted women from the Russian punk band Pussy Riot are on their way to two prison camps far from home, their lawyers and supporters say.

Conditions are reported to be tough at the camps, in Perm and Mordovia, east of Moscow. Those areas were used for mass prison colonies in the Soviet era.

Maria Alyokhina, 24, and Nadezhda Tolokonnikova, 22, were jailed for two years each in August for singing a crude anti-Kremlin song in a cathedral.

The jail sentence was widely condemned.

They were convicted of "hooliganism motivated by religious hatred" over the obscenity-laced "punk prayer" they performed in Moscow's main cathedral, Christ the Saviour, on 21 February.

Two lawyers and activists in the protest group Voina reported the young women's transfer to the camps, far to the east of Moscow, on Monday. Tolokonnikova's husband Pyotr Verzilov is a member of Voina.

On Twitter the Pussy Riot group said on Monday: "At the weekend Nadya [Tolokonnikova] was sent on a special flight to Mordovia, while Masha [Alyokhina] was sent to Perm region. Those are cruellest camps of any that could have been chosen."

One of the lawyers, Mark Feigin, was quoted as saying "lawyer Violetta Volkova was told by phone in the SIZO [special prison] that the girls had been transported".

The authorities have not confirmed the women's transfer, nor is it clear which precise camps they will be housed in.

Alyokhina has a five-year-old son, Filipp, and Tolokonnikova has a four-year-old daughter, called Gera.

The Russian news website Newsru.com says both women are now quite far away from their families and fellow activists.

On 10 October the two women lost their appeal against the sentence, but a third - Yekaterina Samutsevich - was freed with a suspended jail sentence.

Last week the lawyers' plea for the two-year sentence to be deferred was rejected. They had argued that the women should not go to jail until their children had reached the age of 14.