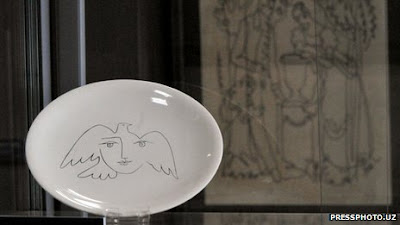 A collection of "forgotten" ceramics made by the world famous artist Picasso and not seen in public for 40 years has gone on display in Uzbekistan.

The ceramics were first exhibited in Tashkent in the 1960s, officials say, and were put in storage afterwards.

Correspondents say it is not clear why it has taken the museum so long to re-display the items. One theory is that their existence was almost forgotten.

Only a handful of staff were even aware that the museum had them. Art experts in Uzbekistan say they have no doubts that they are genuine.

Uzbekistan - famed for its own pottery and ceramics industry and renowned for its art collections - has long been used by wealthy Russians to store priceless works, many of which were taken there for safe keeping during World War II.

Priceless Stradivarius violins, handicrafts and other renowned works of art have all been sold there over the years.

The BBC's Hamid Ismailov says that the ceramics were owned by one of Picasso's closest friends - French painter Fernand Leger and his wife Nadya.

When Mr Leger died in 1955, the collection was inherited by Nadya, who decided to give them to museums in what was then the Soviet Union.

Our correspondent says that it is thought that they ended up in Tashkent under the Soviet Union's quota system which distributed works of art for exhibition in outlying areas of the country.

The ceramics were rediscovered by museum workers in 2004, our correspondent says, and because the Soviet Union by then had ceased to exist, nobody claimed them back.

Picasso produced more than 2,000 ceramic pieces - including plates, jugs and vases - between October 1947 and the autumn of 1948, experts say. He reputedly enjoyed this form of art as much as drawing and painting.