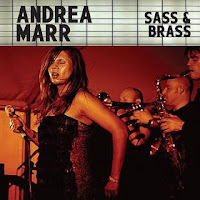 A five-track EP with a title that may just be the most concise three-word review ever written. I’m not sure I can better it, but here goes…

Andrea Marr has been playing her blues since 1999 and winning awards almost from the off. The Melbourne singer-songstress, together with her band – this particular line-up has been playing together for five years – have also been recognized internationally. The much-respected Chicago blues label Blue Skunk Music signed them up in 2010, re-released their “Little Sister Got Soul” album in 2011 and now the “Sass & Brass” EP.

It’s easy to hear why the label was so impressed. Marr’s inherited a style that made Etta James a legend and Sharon Jones a cult phenomenon. These five tracks leap from the speakers, grab the listener by the lapels and force them onto the dance-floor; resistance is futile. The horn section works in perfect harmony with Marr’s powerhouse blues-soul voice and the songs themselves sound like a succession of classic hits, forged in the Chess studios or Muscle Shoals, 30 or 40 years ago – or yesterday. It’s almost pointless drawing attention to standout songs as there’s absolutely no filler, just a selection of timeless, soulful, high energy, feelgood blues. If you’re partial to any of the above names, or Ike and Tina or Aretha Franklin, then you’d be foolish to miss out.
www.andreamarr.com
www.facebook.com/Andrea-Marr-Band
Rob F.