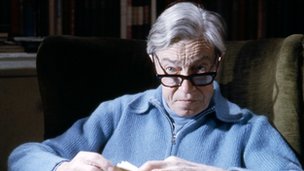 Papers from the archive of poet Cecil Day-Lewis have been donated to Oxford University's Bodleian Libraries by his actor son Daniel and daughter Tamasin.

The archive, never seen in public before, includes a letter from WH Auden to Day-Lewis criticising one of the latter's poems.

It also includes the final stanza of The Newborn, written to mark the birth of Daniel Day-Lewis.
The collection will be celebrated with a day of special events on 30 October.

Tamasin and Daniel Day-Lewis said they were "thrilled" with the archive's new home.

"If the manuscripts had ended up outside the country it would have saddened us all as a family as the poets who became papa's lifelong friends and peers all met up at Oxford as undergraduates," they said in a joint statement.

Cecil Day-Lewis was one of the most notable Anglo-Irish poets of the 20th Century.

He studied classics at Wadham College, Oxford from 1923 and went on to become a well-known member of the Auden group of poets and intellectuals in the 1930s.

He was elected professor of poetry at Oxford in 1951 and was appointed Poet Laureate in 1968.

He also wrote mystery novels and short stories under the pseudonym of Nicholas Blake.

The collection also includes an early draft of Day-Lewis's elegy for TS Eliot, At East Coker, published in 1970 in his book The Whispering Roots.

There are several hundred correspondents who have contributed to the archive, including letters from the likes of Sir Kingsley Amis, Sir John Betjeman, Sir John Gielgud, Christopher Isherwood and Sir Stephen Spender.

The one-day event to celebrate the donation of the archive will include readings and a discussion of Cecil Day-Lewis's life and work by Tamasin Day Lewis and other scholars.

The Bodleian Libraries form the largest university library system in the UK.