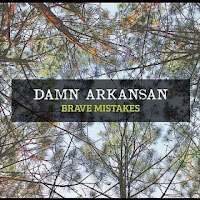 With a debut album already under their collective belts (2011’s self-titled effort), Damn Arkansan return to the fray with “Brave Mistakes”, a 5-track EP, which does everything possible to emphasize the quartet’s way with a country rock tune. For those of us who have been listening to Americana for longer than they care to remember, there’s much here to be enjoyed and savoured. Damn Arkansan feels and sounds like a musical evolution. There’s a host of influences at play, from the Grateful Dead’s “American Beauty”, to Ryan Adams’ Whiskeytown and the pop sensibility of mid-period Wilco, yet Drew Walls writes songs that are utterly fresh and contemporary.

“Brave Mistakes” may only be five tracks and 20 minutes long, but it makes a big impression. They fly out of the traps with “Broke”, the longest track here, it begins with a meandering piano, before the band kicks in and the effect isn’t a million miles away from Bob Weir fronting The Jayhawks. Yep, that good. Caleb Rose’s guitar playing is exceptional throughout, but it’s perhaps at its best on “Harlem”, where it rings and chimes, and they bring things to a conclusion with “Twice a Day”, a bona fide rocker and a great performance from everyone involved. More please.
www.facebook.com/DamnArkansan
www.damnarkansan.com
Rob F.