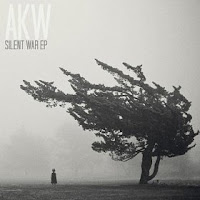 AKW is Alexandra K. Wisner, ex of The Intervals and The Tints. The latter featured Flea’s daughter Clara Balzary on drums, a link that resulted in John Frusciante producing one of their records, and in 2005 they were invited to play the Vincent Callo curated All Tomorrow’s Parties Festival. Then they split. If my sums are right, Wisner was 17 years old.

What followed for Wisner was a new company, various music projects for films, solo records and earlier this year a new album, “For No One”, recorded with band mate Adam Cude, and completely funded by fans via Kickstarter, in just ten days. Now, six months later, a new EP. Cut from much the same cloth as its predecessor, “Silent War” continues the duo’s journey into spacey folktronica, where Cude’s wispy acoustic guitar plays gently with Wisner’s keyboards, and voice. It’s a lush, delicate combination, with a succession of musical peaks and ethereal tones.

On “Obvious” they’re at their most experimental. A young girl’s voice speaks half heard sentences about death and loss over drones and simple keyboard runs, and is intermittently interrupted by Wisner’s soaring vocals. Older listeners may shed a tear for their old Cocteau Twins albums. “Sinking Boat” is altogether more finely structured, and its otherworldly delivery does little to disguise a perfectly executed pop song. The title track is just as finely balanced and its equal. If names like Cat Power and PJ Harvey feature heavily on your playlists then AKW seems a natural next step.
www.alexkwisner.tumblr.com
www.facebook.com/akwmusic
www.akwsound.bandcamp.com
Simon M.