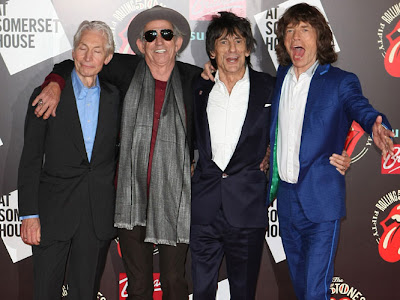 The Rolling Stones have announced four concerts in London and New York at the end of the year.

The band will play London's O2 Arena on 25 and 29 November and at the Prudential Center in Newark, New Jersey on 13 and 15 December.

Reports of a possible tour to mark The Stones's 50th anniversary had been circulating for a number of years.

Tickets for the UK gigs go on sale on Friday, with the New Jersey tickets on sale next Friday.

Pre-sale tickets for the UK dates are already available with prices ranging from £106 - £406 including ticket fees.

Making the announcement in a video on YouTube, the band said: "You must have guessed this was coming.

"Surely you didn't think we weren't going to do this? Soon we will be back on stage playing for you in two cities that know how to rock and roll."

Mick Jagger suggested there could be some special guests at the shows, saying there would be "maybe a few friends joining us".

Fans can also expect a stage based on the band's ubiquitous tongue and lips logo.

The news comes as the band release a new single, Doom and Gloom.

Jagger told BBC Radio 2's Chris Evans: "It was written very quickly and the band seemed to like it.

"It was a quick recording session. We recorded two songs - the other one is called One More Shot."

The singer also appeared to hint that the four new dates could be the start of a longer run of gigs at a later point.

Prior to the announcement, when asked how many shows the band would be performing, Jagger replied: "It's not going to be a long tour, the first bit."

The Rolling Stones' last world tour, A Bigger Bang, played to 4.5m people in 32 countries over two years before it finished in London in 2007.

Despite high ticket prices, Scott Rowley, the editor-in-chief of Classic Rock magazine, said fans would still pay out to see the band.

"They'll do it because they haven't seen them in so long, and there's a suggestion it could be the last time they tour," he told the BBC News Website.

"People have got used to paying outlandish fees for things like Olympics and football tickets - and demand far outweighs the number of seats available."

Mr Rowley said if a full tour schedule is later announced, it could eclipse its previous record.

"Rock bands still have the reputations that draw generations. You hear their songs on TV and the radio and it's everywhere."

"These songs may have been written when they were 20 years old, but it's still exciting rock music."