McCartney: Yoko 'not to blame' for Beatles split 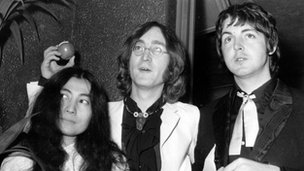 Yoko Ono was not responsible for splitting up The Beatles, Sir Paul McCartney claims in a new TV interview.

"She certainly didn't break the group up," the 70-year-old will be seen telling Sir David Frost in an interview to be broadcast next month.

"I don't think you can blame her for anything," he says, claiming John Lennon was "definitely going to leave".

His remarks challenge a school of thought that holds Lennon's widow responsible for the band's separation.

Sir Paul's revelations feature in an hour-long interview with Sir David, 73, that will be aired on the Al Jazeera English TV channel in November.

The programme will also see the former Beatle claim that Lennon, who died in 1980, would not have written his hit song Imagine without the conceptual artist's influence.

"When Yoko came along, part of her attraction was her avant garde side, her view of things," Sir Paul tells the veteran broadcaster.

"She showed him another way to be, which was very attractive to him. So it was time for John to leave."

According to The Observer, the interview will see Sir Paul muse on losing his mother at the age of 14 and the death of his first wife Linda in 1998.

The musician also discusses being a father and a grandfather, which he describes as "my coolest thing".

Both McCartney and Lennon went on to forge successful solo careers after the Fab Four split up in 1970.

Earlier this month saw the 50th anniversary of The Beatles releasing their first single, Love Me Do, in 1962.