Review: Brandon White – A Win For Both Sides

Brandon White – A Win For Both Sides (Independent) 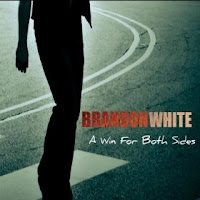 From Fort Smith, Arkansas, Brandon White (and his band) are making a name for themselves throughout their home state and are picking up plenty of column inches and radio play all over the web. White released his debut EP, “Streetlight Lullabies” in 2009, and “A Win For Both Sides” is his first full-length outing. Where “Streetlight Lullabies” got his foot in the door, “A Win For Both Sides” should see him kick it down.

Custom built for the world’s arenas, White’s brand of white-knuckle Americana-rock falls somewhere between the blue collar melodicism of Springsteen, the dustbowl riffing of Bon Jovi and The Gaslight Anthem’s unerring energy. How White and his cohorts have managed NOT to come from New Jersey, I don’t know, but to my English ears, it hardly matters, as these songs, first and foremost, sound American - we can leave the details to the locals.

As for the songs themselves, the title track hits first. White’s got just the right voice; weathered and far from pure, and it nails his words to a tune powered by buzzsaw chords. “Bound To Come Along” ebbs and flows, and when the guitars rip into the anthemic chorus, those of a more rowdy disposition may well feel the need to punch the air. When they play it slow and cool on “House of Cards” they’re just as engaging, and hats off to whoever’s responsible for the guitar solo at the end.
www.brandonwhitemusic.com
www.facebook.com/Brandonwhitemusic
Rob F.