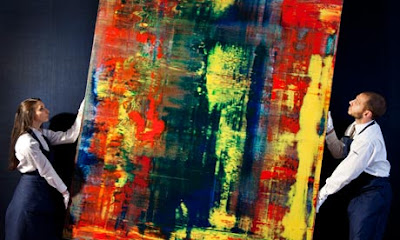 An oil painting by the German artist Gerhard Richter has sold for £21m ($34m) - an auction record for a work by a living artist.

Abstraktes Bild, painted in 1994 , which was owned by rock star Eric Clapton, has been described as a "masterpiece of calculated chaos".

The artwork, expected to fetch £9-12m, was sold to an anonymous bidder at Sotheby's in London on Friday.

A round of applause broke out as the painting went under the hammer.

Gerhard Richter, 80, who lives in Cologne, is considered by some to be the world's greatest living painter.

Before the sale, Alex Branczik, senior director of contemporary art at Sotheby's, said of the painting: "Abstraktes Bild is one of the great abstract masterpieces by Gerhard Richter.

"Its appearance on the market presents collectors with the unique opportunity to acquire an outstanding work by one of the greatest living painters."

A sister painting of the artwork is currently jointly owned by the Tate and the National Galleries of Scotland.

Even before the sale, the Sunday Times Rich List estimated the Cream guitarist' s wealth at some £140m, making him the 17th-richest British musician.

He has previously sold off part of his extensive guitar collection to raise money for his rehab clinic, which he founded in 1998 to help treat drug and alcohol addiction.