Review: The Goodhues Band – Songs From Inside

The Goodhues Band – Songs From Inside (Independent) 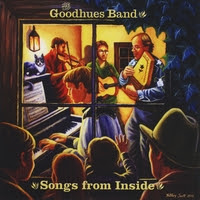 The Goodhues Band from Massachusetts is, as their name suggests, a family band. Three Goodhues are involved: Kim Goodhue on vocals and autoharp, Geoff Goodhue also sings, plays guitar and mandolin with Ryan Goodhue on keys and hand drums. They’re joined by drummer Derek Hayden and third vocalist Nick Vandenberg, who also contributes string bass, and guitar. Like all the best family bands, they play roots music, and the Goodhues play a variety of styles. On their website they define their repertoire as “American ‘roots’ country, Appalachian, bluegrass, Southern gospel, contemporary folk, traditional Celtic, Irish ‘pub’ songs, and original compositions”. They obviously like to keep things interesting.

They approach their songs with a bundle of energy and contagious enthusiasm, and the listener can’t help but be similarly infected. Their harmony singing is instinctive and warm and their musicianship is just as enjoyable. Whichever genre they’re playing, their passion carries the day, and overcomes any concerns regarding authenticity – whatever that really means when we all live in the global village.

If you suspect that you might like The Goodhues Band, but would like to hear some songs before purchasing, then the following tracks should seal the deal: the old naval song “The Grey Funnel Line” starts the collection, and here it’s performed without instruments, and is moving and lovely. Their take on Emmylou Harris’ “Red Dirt Girl” doesn’t quite match the original, but it doesn’t fall too far short, and the change of perspective gives a subtle twist, and the old Dixieland chestnut “Blues My Naughty Sweetie Gives to Me” is a lot of fun.
www.goodhuesband.com
Rob F.