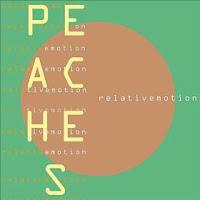 Relative Motion is a Californian quintet who got together in the summer of 2011. They label themselves an indie / surf rock band, which used to be the standard description for any alternative guitar band overly familiar with the Pixies catalogue, but happily, I don’t hear any one overwhelming influence on “Peaches”, Relative Motion’s debut EP.

Considering how relatively new they are, they’ve got their act together very quickly. Over five tracks they sound incredibly cohesive, as if they’ve been refining and defining their sound over a number of years rather than months. Vocalist Michael Meyers has a distinctive voice that can be pitched high and wild for emphasis, and guitarists Cole Warkentien and Ryan Baine involve a variety of diverse techniques, from Vampire Weekend-esque jangle to chunky riffs, and plenty of miscellaneous effects in-between.

They’re decent songwriters, too. Any song from the five would sit perfectly on a daytime radio station playlist, playing contemporary rock and pop, and my favourites, “Junebug” and “Paris Life”, genuinely deserve a sizeable audience. If they were based in the UK, they’d be on half a dozen festival bills next summer. As it is we’ll probably have to wait a little longer before we see them on British stages.
www.facebook.com/RelativeMotion
www.relativemotionmusic.tumblr.com
Simon M.