Review: Bruce The Mover – The Year That I Was Drunk

Bruce The Mover – The Year That I Was Drunk (Runtman Records) 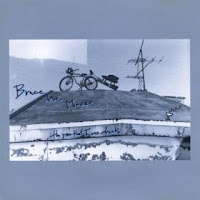 Originally recorded in 2000 and released in 2002, “The Year That I Was Drunk” has been re-issued by Runtman Records to coincide with the release of Bruce The Mover’s new record “Always Wanted... Northwest Portland”. Bruce The Mover aka Bruce Shera also happens to be the big cheese at Runtman records, running the Oregon based label, producing the records and playing on them, too. A bit of an all-rounder is Mr. Shera, and his many fingers in many pies probably explains the gap between records.

I can’t imagine the reaction “The Year That I Was Drunk” received upon its original release, though like most true independent music, I would have though it would have been limited. That’s unfortunate; it’s mostly an engaging and pleasurable listening experience, with plenty of weird and wonderful ideas running throughout its 73 minutes. Things get off to a cracking start with “Straight Path to the Van, No Video”; which simultaneously reminds me of English singer-songwriters like Nick Currie (Momus) and Luke Haines, together with something altogether grungier and more American. Currie, in particular was influenced by Serge Gainsbourg and Jacques Brel, and Shera was obviously bitten by the same Francophile bug. Two French-language songs in the middle of the album, “Le Bon Dieu S'en Est Alle'” and “Dehv”, pay tribute to the songwriters, and both hit the spot. “The Band I Heard in Tijuana” is lushly orchestrated pop with what sounds like a steel drum, and “Richard Butler Monday” is just as opulent, but inward looking and self-critical.

Fans of any of the above, including the titular Richard Butler, should check out the album. There’s a lot here to like.
www.runtmanrecords.com
Simon M.