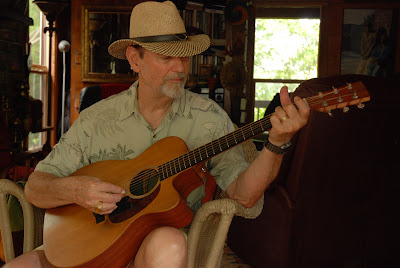 Bob Tobin is a native of Charleston, South Carolina. He plays guitar, harmonica and percussion, and most of all he likes writing and singing his songs.

Leicester Bangs: Tell us a little about yourself.
Bob Tobin: I was born in Charleston, South Carolina, which recently was declared by Condé Nast magazine as the number one city in the US to visit. My first performance was Silent Night at a Christmas party for my kindergarden class. Most of my life has been spent on the salt waters of the world. I spent four years in the US Coast Guard, three years as a commercial fisherman, three years as a tugboat captain, and twenty five years running and owning a marine construction company building docks, boat houses, boatlifts, and anything else pertaining to the water. You will find that the oceans play a big role in the songs that I write.

LB: How did you start out making music?
Bob: When I was in high school I was in the glee club. Three of my very close friends and I got together and created a quartet singing all the songs of that era, doowop mainly. That was the birth time of all the great music that started then and has continued to now. I messed around trying to play the guitar, like everyone else, but never really got good at it.

I wrote my first song during that time at the age of eighteen. I never have recorded it but I should. It was R&B in style.

LB: Whom did you grow up listening to and how do they influence what you’re doing now?
Bob: I have always been drawn to that special and different sound in a voice. There are so many sound alikes today and I yearn for that special voice again. My first love was Al Jolson. Now I'm telling my age. My second and third were Ray Charles and Jimmy Buffet. Delbert McClinton should be thrown in there too. I think those last three really influence my style of writing.

When I sit down to write a song, I never have a genre in mind. It may come out blues, pop, rock, country, or you name it. Hey you young people, don't ever count out the old guys, we still know how to rock! Give a listen. 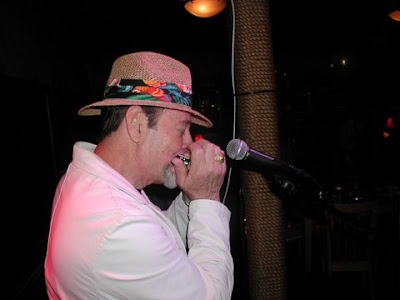 LB: Tell us about your latest release.
Bob: This CD “The Other Side Of The Horizon” comes three and a half years since my last one. I wrote many songs during that time and chose fourteen to be on this one. If you're a songwriter you know that there are a pile of them that just don't cut it, crumpled up pieces of paper. I do think that this one is my best so far. And I do believe that if you can surround yourself with great musicians it will elevate you to a level that you didn't know you could reach.

LB: Do you get out and play your music live, and if so, what can an audience expect at one of your shows?
Bob: My wife, Dellie, and I have done a duo for last twenty-five years. Today we do three things, she has a trio of gals that she plays with, I have some buddies I play with, and from time to time she and I will do some private engagements. We’ve traveled extensively enjoying wherever we've gone but always taking our instruments and playing wherever it may be.

I return to Costa Rica every winter with my music friends to play our music and see old friends.

LB: What aspects of playing and recording music do you most enjoy?
Bob: If you're fortunate to have an audience who is quiet and appreciates what you do, there's nothing else like it. That's when I think I shine? There becomes a connection and intimacy that's hard to explain. I know this to be true because it happens to me when I experience it with another performer. I try not to do the loud bars anymore. Only if it pays REAL GOOD (laughs).

Then there's the recording. When I go into the studio I hate to leave. When this last CD was finished it felt like I was addicted and having withdrawls. As I said earlier, being around great musicians elevates me. And that's a real good feeling!

LB: Where can people find (and buy) your music?
Bob: I have three CDs out: one with my wife and two of my own. All three can be found on CDBaby. My two can also be found on iTunes and Amazon. Go to my website to check it all out (link below).
www.bobtobinmusic.com
www.cdbaby.com/Artist/BobTobin