Review: Linsey Alexander - Been There Done That

Linsey Alexander - Been There Done That (Delmark) 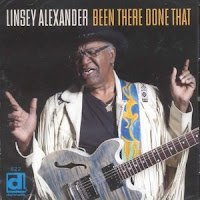 Mississippi-born, Memphis-raised, Chicago-resident, it beggars belief that Linsey Alexander could have found any other station in life other than professional bluesman.

He may not be a household name, but on ‘Been There Done That’, recorded live in Delmark’s own Riverside Studio in March of this year with a nine-piece band, he certainly plays like a man born to it. His reputation around Chicago’s North Side club land for charisma and charm precedes him and shines through his warm, relaxed songs as well as being reflected in his soulful singing. He’s no mean guitarist, but it’s the depth and understanding of his supporting cast, especially on opening number ‘Raffle Ticket’, Willie Kent’s ‘Looks Like It’s Going to Rain’ and album highlight ‘My Momma Gave Me the Blues’, that helps lift the whole above the merely decent into something which calls out to be recognised as world class.
www.linseyalexander.com
www.delmark.com
Neil B.