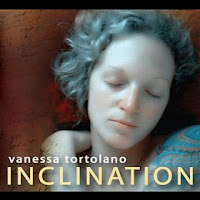 Vanessa Tortolano is a mother of two and co-owner and operator of NessAlla Kombucha, a Kombucha brewing company, which trades in her hometown of Madison, Wisconsin. Making time for music must be difficult, but over the years it hasn’t stopped her singing with a variety of different acts, and now she’s found time to record and release her debut album.

Understandably, her music can’t be her main priority, which is a shame, as “Inclination” is an interesting and thoroughly enjoyable singer-songwriter collection. She indicates on her websites that artists such as Ani Difranco, Sarah McLachlan and Tori Amos provide much of her inspiration, but I’d like to think Kate Bush and Polly Jean Harvey have a place in her record collection. There are certainly hints of both on the title track, a beautifully structured rumination on staying strong and being your own person whatever the pressures applied. It’s a clever arrangement and Tortolano delivers with a fervent, animated vocal.

There are plenty of other tracks to get excited about, too. “Little Things” is jazzy and light, and perfect for a summer’s day. The delicate, unhurried “Warrior” taps into a Celtic folk tradition, and it’s probably my favourite, though final track “Sky”, at nearly seven minutes long, is multi-layered and ambitious, and not unlike the free-form folk-rock songs Roy Harper used to regularly cut.
www.facebook.com/Vanessa
www.reverbnation.com/vanessat
Rob F.