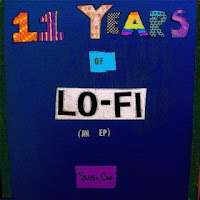 When anti-folk first emerged from New York, it seemed far too insular to thrive. Of course, all Lach and his cohorts had done was to give a name to a movement that was already happening in many different cities in almost as many countries. Punk had inspired a generation to pick up guitars, and not everyone was a team player. St. Louis native Suzie Cue describes herself as an anti-folk artist, and she is, but foremost she’s a singer-songwriter, from a tradition that goes back to Woody Guthrie and beyond.

“11 Years Of Lo-Fi” was written and recorded between 1997 and 2008. The first eleven tracks are studio recordings from two separate sessions, though nothing fancy or too produced, and the final track is in fact a three-song live set. The studio recordings, especially the earlier session, is particularly basic and stripped back. Just Cue and her guitar, but it does have the benefit of focusing the listener’s attention on the songs, and here she excels. Her robust voice does them justice, too, and “Just Break Your Heart” is particularly good. From the slightly stronger latter session, “Anymore” and “Be My Bob Dylan” standout, and should be tracked down, pronto. Think of the live set as a bonus, a taster of Cue in her natural habitat, charming a crowd and singing her songs.
www.reverbnation.com/suziecue
www.facebook.com/SuzieCueMusic
Simon M.